The History of Home Funerals

From Family Tradition and Back Again

“Twice is a habit, three times is a tradition.”
ELIZABETH SCHLAGETER SCHMITT
​The expectation that one would die and be cared for at home was such a sure thing that folks even built funeral-friendly elements into their homes. Some early American homes have a coffin door which leads from the parlor directly to the outdoors, built without steps or obstacles and provided an easy means of getting the body out of the house. New England farmhouses usually had coffin windows for the same purpose, and attics would be filled with wide pumpkin boards to be used for coffin building, curing over time until needed.

​Until the 1900s, folks were buried only in a shroud (aka winding sheet) or in a 6-sided coffin. The casket, that rectangle we think of today, was late to show up on the scene. The 6-sided coffin was favored because its special shape kept the body snugly in place, minimizing the problem of shifting weight. Perhaps more importantly, the 6-sided coffin (also called a "toe pincher") allowed the family to literally cut corners by tapering the rectangle at both ends. This means the box took up less area than a rectangle so there was less dirt to move when hand digging the grave. Since one cubic foot of loose top soil weighs about 60 pounds, every shovel full counted.
Family and friends cared for the body and kept it laid out at home for as many days as it took to build, dig, and in some cases, wait for signs of decomposition to ensure no one was being buried alive (a popular fear for many years). Economic resources, immigrant status, and religion all influenced what folks did during the viewing, but vigiling the body was common. Death care was a personal, handcrafted endeavor, and involvement in the process was a demonstration of compassion and emotional investment in town, village or prairie life.

The change from community-led funerals to the use of hired help was a change that rolled out very slowly and unevenly across the US as towns grew into cities, and community gave way to anonymity. Even close friends might not be able take time off from their new city-styled employment to personally assist in the potentially multi-day vigil, funeral and burial.

Miasma theory was finding a home in the public consciousness, supporting the idea that the essence of death which was present in air that surrounds cemeteries was dangerous. To counter this bad air, cemeteries were being moved to rural, bucolic spaces where the fresh air of the countryside could exert a cleansing quality on this dangerous miasma-filled cemetery air. City center burial grounds  were getting full, some as early as the late 1700’s following Philadelphia’s yellow fever epidemic, and by 1831 the town-centered burial grounds of big cities were being moved to the outskirts. The famous Mt. Auburn Cemetery, 4 miles outside the city of Boston, is the first cemetery built addressing the new sensibility: it was designed to be a magnificent park and garden, conducive to picnics, Sunday strolls, away from the heart of town and in fresh, flower scented air.

Into the swirl of the expanding USA came the Civil War. Soldiers died on battlefields far from home, and families wanted their dead children returned to them. The bodies shipped by train, and the long, slow, journeys, especially in the summer, were an indelicate and sometimes gruesome affair of decaying bodies and unpleasant scenes.

The desire to slow decomposition in an era before refrigeration promoted the development of embalming. Soldiers were sometimes embalmed right on the battlefields, shipped via train, then brought to their mother’s door by the local livery driver. Furniture builders and cabinetmakers started making coffins, and these two groups of tradesmen, the woodworkers and the livery drivers, began to compete for the business of the dead. The first mass-marketed coffins were being produced to meet the demand created by the war, and the trade of Undertaking was slowly coming into being. When the embalmed body of assassinated President Lincoln was put on display before thousands of Americans, giving embalming its first major marketing moment, the newly-forming death trade found another product they could sell: a promise, albeit a false one, of a non-decaying body.

By the end of the 19th Century, the job of Undertaker was a trade which was regularly seen on census records, even in rural areas. Though transportation and coffin building were being outsourced in cities, dying at home and caring for the dead was still a community and family affair in rural areas, remaining common through the 1940s. In many rural areas of the country, family and community funerals never ceased. 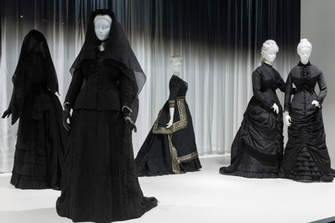 Victorian mourning attire room, Metropolitan Museum of Art’s 2014 show “Death Becomes Her”
Alongside this developing trade of coffin building, body transport, and embalming, the Victorians brought forth a new and  elaborate fashion-driven set of funeral practices which included specialized attire, jewelry, folk art, and photographs of the dead. The Victorian funeral practices were so dense and well documented that they remain very alive in our cultural memory. However, the fashion of Victorian mourning was too demanding to survive the mass casualties of WWI and the Victorian sensibilities shifted to less constrained and rule-bound practices.

It was during the heyday of the 1930s marketing machine that the undertakers concentrated on rebranding themselves as members of the professional class, aspiring to be viewed on the same plane as doctors and lawyers, who had recently had their own transformation, and not trade laborers. They also claimed anatomical expertise and promoted themselves as the guardians of public health. Both are constructs strategically crafted to influence consumer perception, leading the public to believe that every dead body poses a risk to public health and that highly specialized care is required. Neither is true. By 1955, the US had more than 700 casket makers, embalming and certain caskets & grave liners were falsely and aggressively marketed as preventing decomposition, and the undertaker had successfully transformed their public image from tradesman to moral arbiter of death practices and necessary expert in the scary and mysterious world of death care. 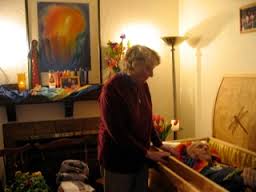 Photo of Nancy Jewel Poer
Meanwhile, in many rural parts of the country, home funerals continued to be the norm, despite the accepted urban perception adopted over time that professionals legally must be hired, contributing to the false narrative that it is illegal to touch a dead body, that it must be embalmed, and that families no longer had the right to care for their own dead. Little by little, rural areas emulated urban practice, giving way to a profession that now has two and a half times more licensed directors than the dying population can comfortably support financially.

In the early 1990s, simultaneous occurrences of home funerals began to be more noticeable outside of rural communities, giving rise to public awareness that families legally, and in fact constitutionally, have always had the right to care for their own. Educators Jerrigrace Lyons, Heidi Boucher, Elizabeth Knox, Donna Belk, and others began teaching old skills and promoting family-conceived and family-led home-based care to inform the public and to empower families to take back the responsibility and privilege of again bathing, dressing, and mourning loved ones in the privacy of their own homes.

More individuals, families, and care communities are rising up in the face of exorbitant professional costs, spiritually disaffected procedures, and environmental concerns in search of affordable, meaningful and authentic funerals. The NHFA exists to further support families and home funeral guides in keeping this deeply human and truly traditional practice available and accessible to all.